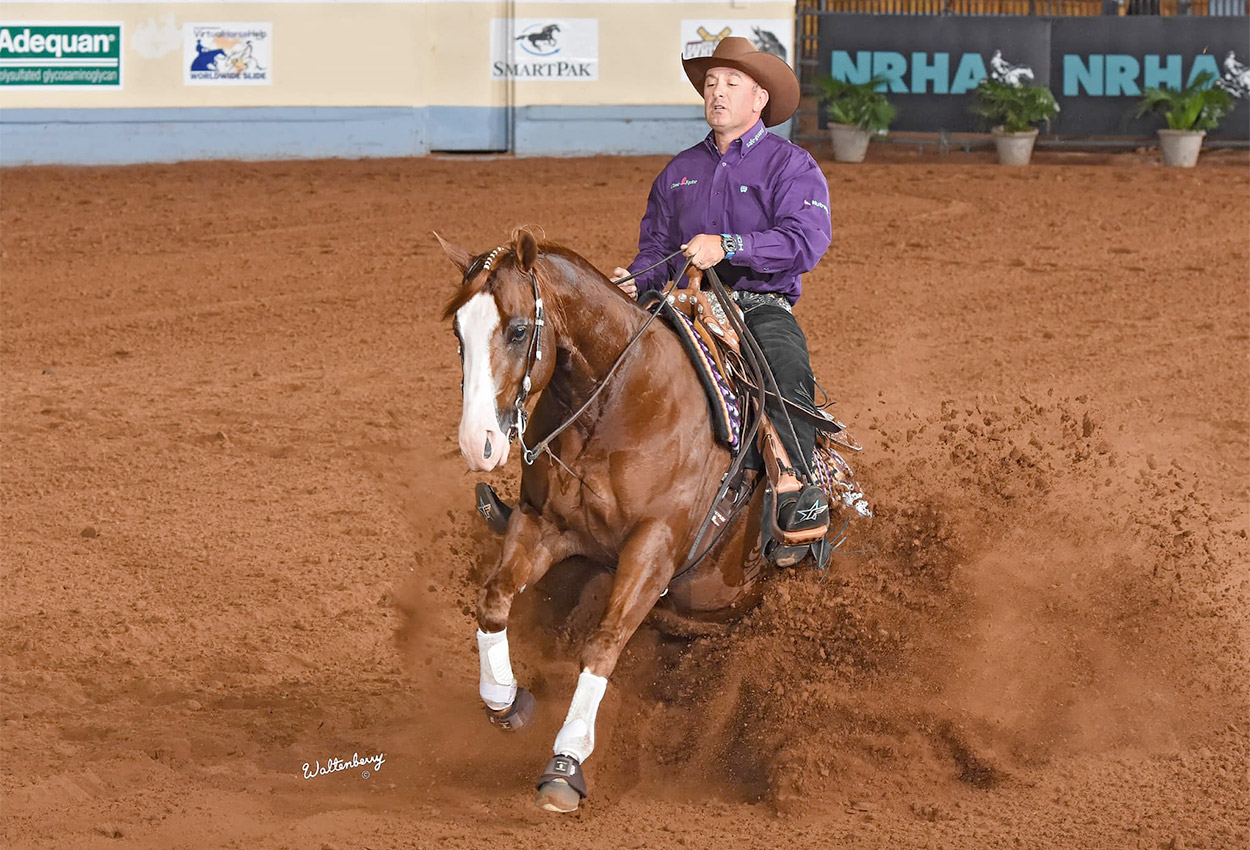 All Bettss Are Off & Fappani Win NRHA Futurity Level 4 Open

Andrea Fappani scored a historic victory in the 2020 National Reining Horse Association (NRHA) Futurity with All Bettss Are Off on Saturday night in Oklahoma City, winning his fourth title in the event — and the richest purse in show history.

Horse and rider earned the win with a 225 for owner-breeder Arcese Quarter Horses USA. The sorrel stallion – like all of the three contenders Fappani had in the Level 4 Open finals – inspired confidence as the trainer rode him through the Gateway of Champions into Jim Norick Arena.

“I felt ready to go. I tried to stay humble and not ask too much,” he said of his strategy with the trio, which included third-place finisher Thee American Dream and seventh-place finisher A Smalltown Trick. “I knew I had the horse talent and I know the futurity it’s a big deal in the fact that it’s a tough deal you go through the two go rounds, there’s so many mistakes that can happen in the finals.”

Owned, bred and nominated by Arcese Quarter Horses USA, All Bettss Are Off is by NRHA Twelve Million Dollar Sire Gunner and out of NRHA Futurity Level 4 Open Champion Wimpys Little Chic.

Fappani dedicated his win to Eleuterio Arcese of Arcese Quarter Horses, saying, “Mr. Arcese said it would be a dream come true for him to win another one. He has been such a big player, and I really want to dedicate this to him. I’ve got a huge group of people who support me and I want to thank everybody.”

In a year rife with unpredictability, Fappani is thrilled to earn the fourth NRHA Open Futurity Championship of his career. Previously, he won with RR Star (2001), Lil Joe Cash (2011) and Spooky Whiz (2016).

“This year has been so crazy, but with the Futurity paying a record $250,000 for the first time, it’s just amazing to win it,” he said.

Having three horses out of his Scottsdale, Arizona-based program secure top 10 finishes in the Open Futurity was a proud achievement for Fappani, who added that he is grateful the Futurity was able to proceed without interruption.

“I enjoy all the other shows, but the young horses are why I wake up in the morning. To come to the Futurity and show is why I do what I do,” he said.

Fappani chose All Bettss Are Off from a group of prospects and said the horse stood out to him from the beginning.

“He’s a super-talented horse,” Fappani said. “He’s a little different than what I’m used to and I think that pushed me. He was so talented. I really had to push myself to adapt to him rather than ask him to adapt to me.”

Achieving scores of 220 in the preliminaries, 220.5 in the Level 4 Open Semi-Finals presented by Not Ruf At All and Tamarack Ranch, and finally a 225 in the MS Diamonds TX Finals, Fappani accomplished his goal of steadily building momentum toward winning the title.

He added that one aspect of shows being canceled in 2020 enabled him to have more time at home to ride and train.

“We had a great group of horses, but I think because we were home so much, we were able to prepare them really well. I told Tish, ‘I think I’m set up to do as good as I’ve ever done at the Futurity, so I think I’m just going to enjoy it,’” Fappani said.