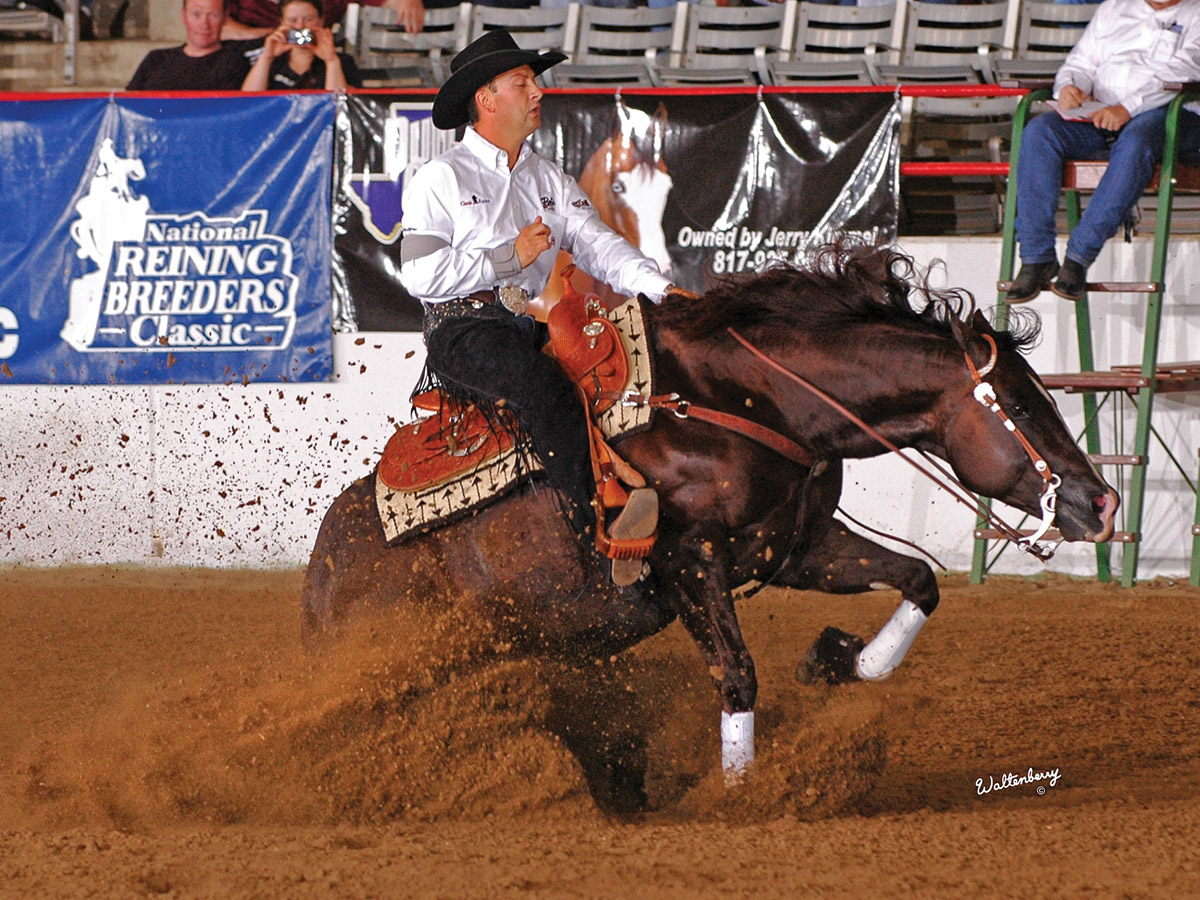 Andrea Fappani and Steve Simon’s Custom Legend became the 2007 National Reining Breeders Classic Open Champions on April 21. But unlike the nine champions that preceded it, this title came only after an exciting runoff in front of a large crowd at the Great Southwest Equestrian Center in Katy, Texas.

Andrea Fappani rode in on Draw 10, Custom Legend (Custom Crome X Dry Doc Bobbie), owned by Steve Simon. Custom Legend loves the Great Southwest Equestrian Center Arena. He’d won $106,631 of his lifetime earnings of $142,962 at the NRBC, so the audience expected a sizzling run – and they got one! The ground-moving stops – and the picture-perfect circles resulted in a score of 232!

When Ruben Vandorp entered the arena on the 2006 NRBC Champion, Einsteins Revolution (Einstein X Fly Flashy Jac), the stallion he owns as part of the partnership of Wagner and Vandorp, the enthusiastic audience was with him. And they stayed with him – even when he flung his glasses off into the crowd! “My hat was falling back and my glasses were down on my nose so something had to go,” said Ruben shortly after the run. The judges marked their scorecards and when the total, 232, was announced, there was a tie for the lead!

The twin scores held through the next seven riders, until finally there was only one left to go, Jordan Larson on Victoria Lambert’s Memorable Affair (Major Vaquero X Coronas Affair). With the noisy crowd whooping and whistling, Jordan gave his best shot, but even an impressive 227 couldn’t budge the leaders. It did, however, end up 5th in the Open, good for $31,000. And more, the great ride on Lambert’s mare earned top honors on the NRBC’s new Mare Bonus, worth over $10,000 more!

Vandorp and Fappani agreed to a runoff, and with a quick drag, the stage was set. Custom Legend entered the arena first, The Great Southwest Coliseum Arena is huge, and getting through one pattern taxes most horses. Many wondered out loud if the two horses would have enough air left for a second run.

Custom Legend immediately quieted the naysayers. From the first explosive stop, to the lightning turnarounds, Fappani negotiated a run that defined textbook perfection, and his score of 236.5 rocked the facility.

Ruben, walking his horse outside, would go next. When he heard Andrea’s score, he remembers thinking, “Wow, that’s so high – I wish I could have seen it!”

After that, he didn’t have time to think, as he powered Einsteins Revolution into the arena for the first big stop on Pattern 9. As the run continued, the crowd stayed with him, and waited for the score. Although he didn’t best Andrea’s score, Vandorp was still elated. Not only had he won the NRBC Open Reserve Championship, worth $60,000, he’d also garnered the Intermediate Open title, good for another $27,711! “It was awesome,” he said. “The very first NRBC ten years ago was the first show I ever entered in the United States. I have always loved the NRBC!”

With the spoils of the win spread before Fappani and his son, Luca, on the saddle with him as he rode in for the award presentations, it all looked easy. But getting that winning horse and the rider to the Great Southwest Equestrian Center had been more difficult than you might think.

Andrea and Custom Legend had been reunited after the horse had been with some other trainers. “Steve wanted him to go to AQHA shows and I don’t really do that, so he sent him to some other riders,” noted Fappani.

When he returned to the Fappani facility, in Andrea’s words, “he felt different.” So different, in fact, that the trainer wasn’t sure they’d be ready for the NRBC. Slowly, though, the “feel” returned.

Custom Legend seemed ready, but Andrea might not be. Three weeks before the NRBC, a tractor mishap resulted in a badly broken humerus, and Andrea Fappani rode the entire show with a brace holding his right arm stationary. He hadn’t been able to ride in those weeks before the National Reining Breeders Classic, having to depend, instead on his assistant, Arno Honstetter to work his horses.

When they arrived to Katy, Texas, the non-conventional preparation continued. “It was really team work. We’d talk about what they needed and he’d ride them at night to fix them then I’d get back on and show them. This was truly a team effort; without Arno, it wouldn’t have happened!”

With the tiebreaker behind him, Andrea said, “I loved the runoff; I have never backed off from one, but if Ruben hadn’t wanted to run it off, I didn’t want to. Legend is special enough to me that it would have been fine to be co-champions.”

Like Ruben, Fappani was complimentary about the NRBC. “I love this show – it’s a fun, fun show and the facility is great. The arena is so big it’s the best place to really express a horse. It really lets you get one shown.”

Great space and an appreciative audience are a large part of any reiner’s formula for success. But in Ruben Vandorp’s case, there was one special person in the audience that added to the excitement. His mother, Joke, had traveled from the Netherlands to watch the show and her presence made the finish even more exciting.