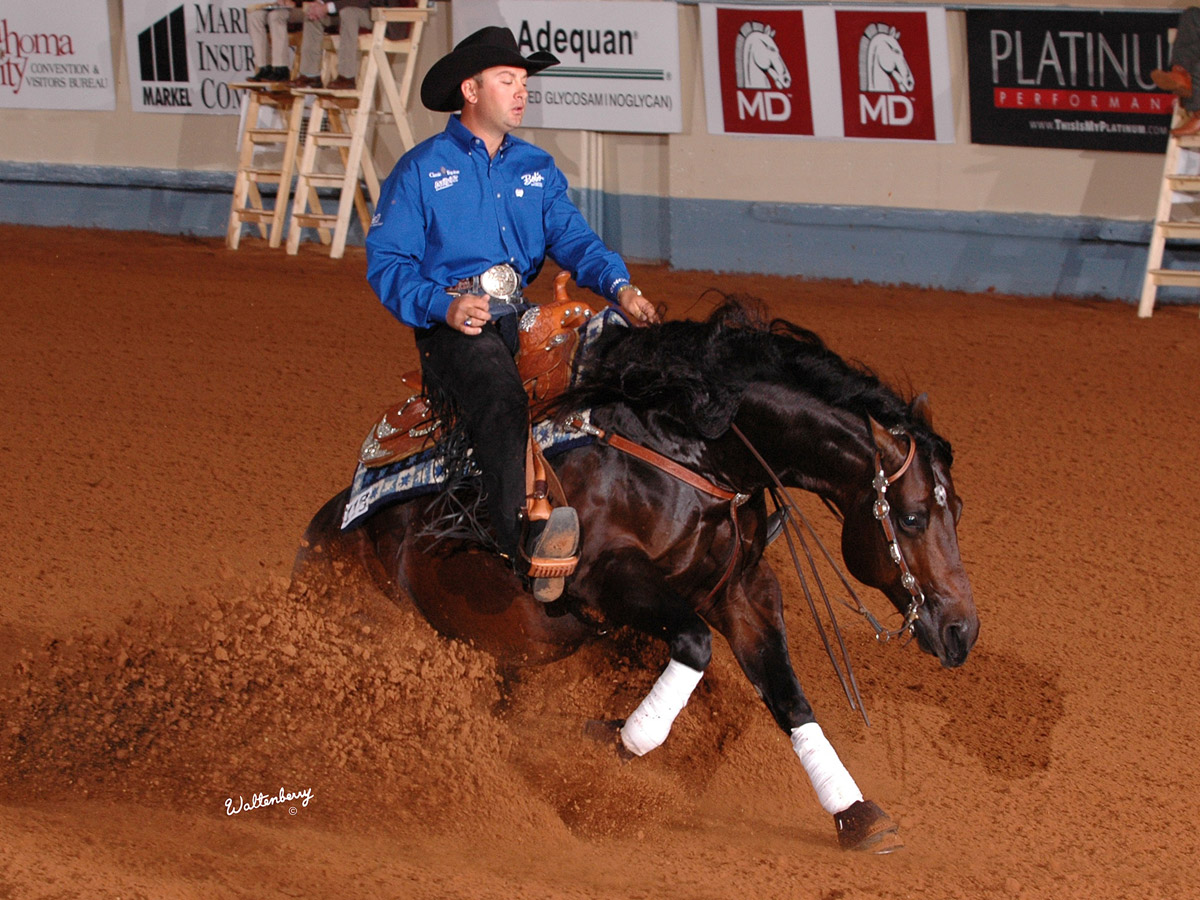 The action just finished up at Katy and it was Cromed Out Mercedes (Custom Crome x Princess In Diamonds x Shining Spark) and Andrea Fappani who took the Natonal Reining Breeders Classic Open title with a smashing 232-point performance. The horse, who is owned by Rancho El Fortin from Mexico, tied to win the preliminary round with a 228 score. Last year’s champions, Wimpys Little Chic (Wimpys Little Step x Collena Chic Olena x Smart Chic Olena) and Shawn Flarida, finished Reserve with a 231.5 score.

At the 2009 NRBC, he earned his second Open Championship on Cromed Out Mercedes, “He felt really good. He’s smooth but powerful at the same time. That’s really hard to do in this large arena,” Fappani admitted. “I really enjoyed it tonight. There was smoothness and speed together. It was a very good combination.”

The San Marcos, Calif., trainer drew up midway through the competition, and while his score of 232 gave him a point and half lead over the current leader, the toughness of the competition ensured he did not rest easy.

“After my run, I started loading the trailer and I wasn’t listening to the scores. That’s what I do when I have a good run – I don’t stick around. I knew I was good but there were some great horses yet to show. After my run, I was going to be happy wherever I ended up no matter what, but I’m even happier now,” he laughed.

The Championship came with a generous paycheck of $75,000, a year’s use of a four-horse Featherlite trailer from Twin Cities Featherlite, a Continental saddle from Continental Saddlery, and a multitude of other prizes from jackets, coolers, dishware, and of course, the signature crystal trophy of the NRBC.

Aldo Ramon, one of the brothers, spoke for the family, saying, “This is great. Andrea saw this horse when he was two and really liked him, and called us up and said he’d found a special horse. We bought him, he went to the National Reining Horse Association Futurity, and did well there. Now he has won this, and it’s really great,” he said.

Fappani took another Rancho El Fortin entry, Custom Harley, by Custom Crome and out of Peppys Tonette, to the NRBC Open Finals, but ended in twenty-ninth place. “Custom Harley is a great horse, too. He was a little off tonight, and had some trouble, but both of these stallions are very awesome horses,” noted Claudio Ramon.