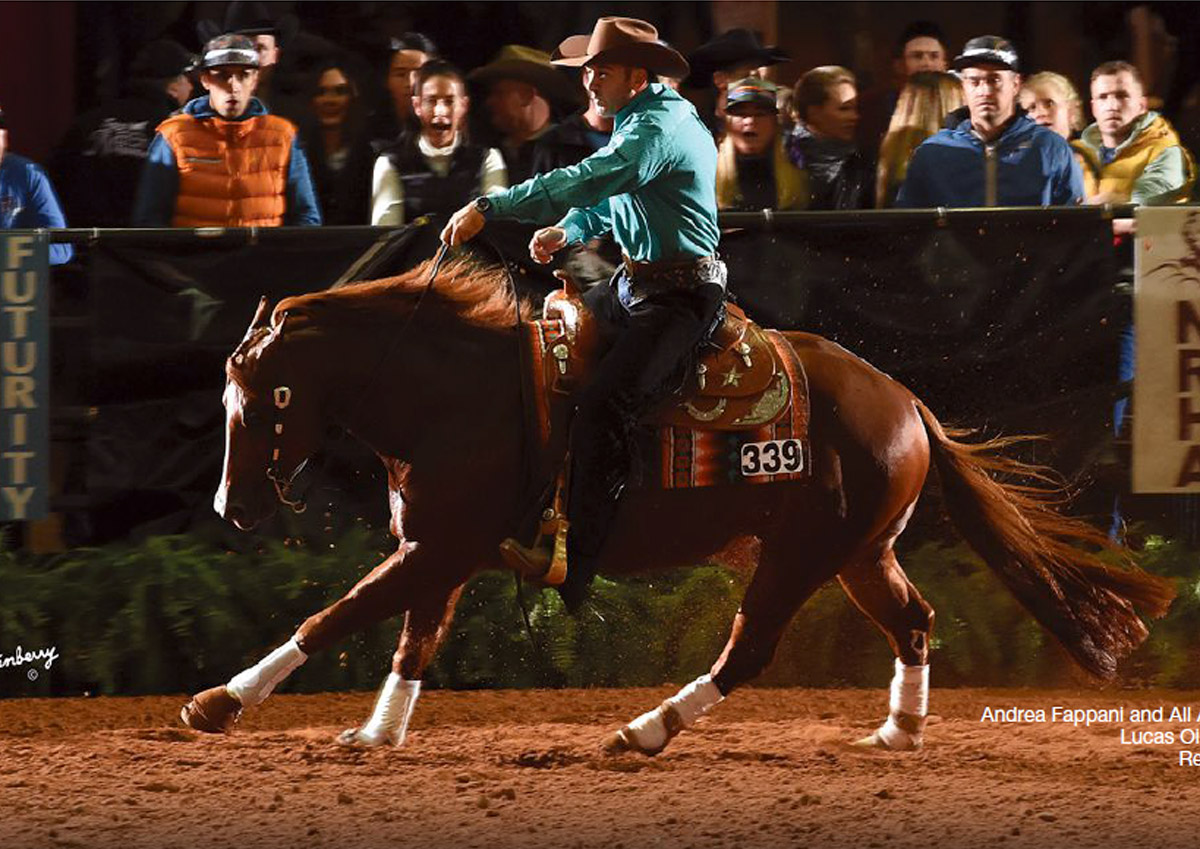 All American Vintage (A Sparking Vintage x All Ruffed Up), a stallion owned by Cuoghi Reining Horses USA Inc., bred by Petra Zeitler and nominated by Harper Conner, settled for reserve honors with Fappani in the saddle. “This horse is amazing,” said Fappani. “I purchased him because my son Luca convinced me to buy him. He wasn’t the easiest horse to ride as a 2 year old, and after the first time I rode him I decided not to buy him. Luca told me I should go back and try him again. We did, and I guess he was right. We won the Tulsa Classic and the All American Quarter Horse Congress Open Futurity [with a 232 score], and now earned the Open Reserve Championship here. The mistakes we made tonight were determined by me, so at the end of the day, even though my goal was to win, I am happy with the way he went for me.”

According to Fappani, the athletic stallion – a full brother to Not Ruf At All – had a great week. “We started where we wanted and he had a solid run to make it to the Semifinal, which he won, so I felt ready for tonight,” he said. “I lost the Futurity, he won it, so we’re good. We went in, he stopped great, and we had two nice turns that I was really happy with. I had been schooling him because in the Semifinal he was leaning towards the gate a little bit, so when I asked him to change, he thought that he wasn’t supposed to go there. He hesitated about a stride, and that cost us one point per judge and that was the Futurity Championship gone right there. After that, I put the hammer down and asked him for everything he had and he stepped up for me. He’s an incredible athlete.”

All American Vintage was sold after the Congress to Roberto Cuoghi, a longtime friend and client of Fappani. “Roberto has been involved for a long time. He stepped up and told me it was a longtime dream of his to have a real contender here. He asked me after the Congress if I thought this horse was special and I told him I don’t think I’ve ever ridden a 3 year old that stepped up as much as he did for me this year, so we’re not going anywhere, we’ll be back next year.”