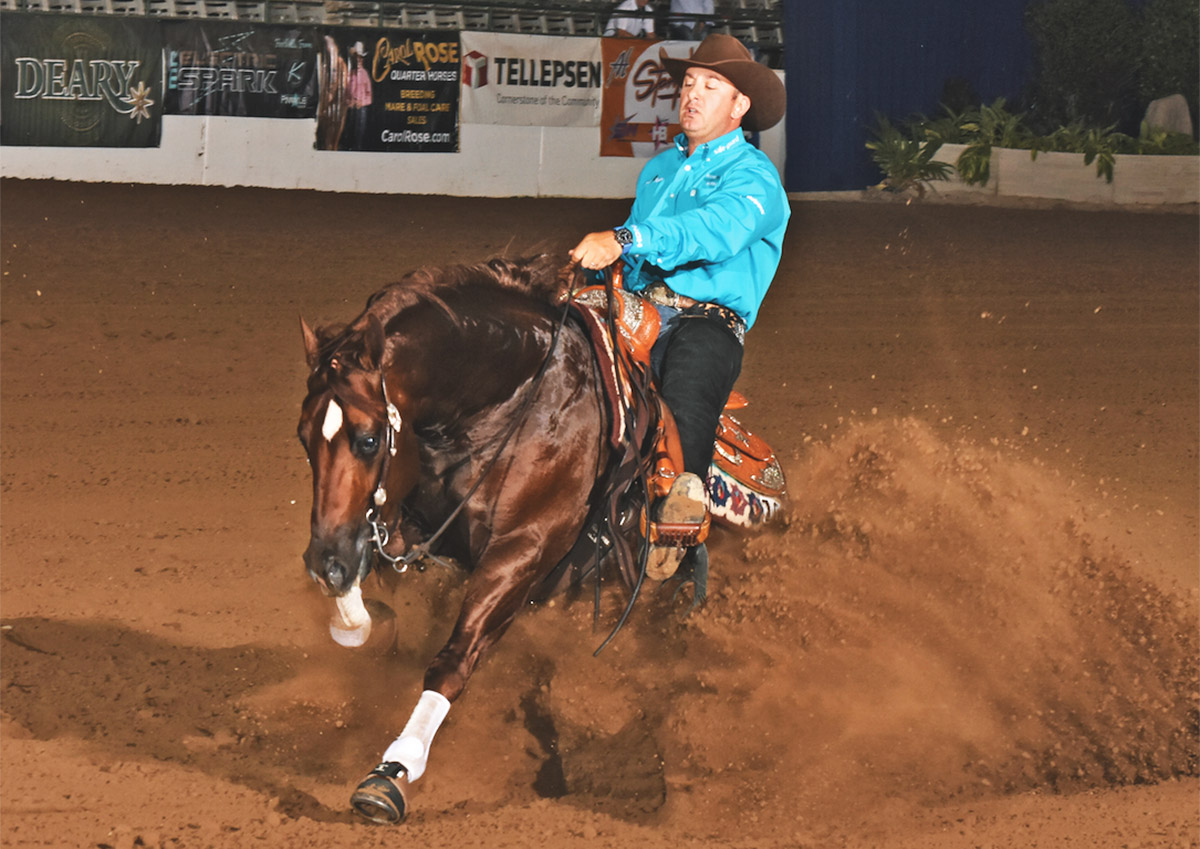 The long miles, hard work and hours spent putting the finishing touches on some of the best reining horses in the country culminated inside the Great Southwest Equestrian Center at the National Reining Breeders Classic (NRBC) with a crowd-pleasing performance. The focus of the night was the Classic Level 4 Open finals where competitors showed up to battle it out for championship prizes, bragging rights and $75,000.

Finishing the night on top of the field were Andrea Fappani and Kathy and Casey Hinton-bred Chic Dreamin (Magnum Chic Dream x Skeets Red Dunit x Skeets Peppy), who rode to a score of 229 and were crowned the NRBC Classic Open Champions.

“It never gets old to win anywhere, but especially here,” Fappani said. “It’s a special place. I have a special place in my heart, because this is where I marked a 236, which is still today the highest in NRHA [National Reining Horse Association] history, so it’s a great place where you can really showcase your horse.”
Fappani and the 5-year-old stallion, owned by Silver Spurs Equine, wowed the crowd with a stellar performance, proving why the NRBC is one of Fappani’s favorite shows and why he had such confidence going into the finals aboard the flashy sorrel.

“I knew I had a horse that could really mark in the stops,” he said. “I had a pattern with four stops, so I said as long as I nail my stops and stay out of the penalty box, I should be in good shape.”

This year marked the fourth time Fappani has claimed the NRBC Level 4 Open Championship. He also had success on two other horses in the finals, finishing fourth aboard Smart Shiners Spook (Smart Spook x Ebony Shines x Shining Spark), who was bred by Rosanne Sternberg and is owned by Silver Spurs Equine, with a score of 224.5. Aboard Thebettertohearuwith (Spooks Gotta Whiz x Chex Out The Cowgirl x Lean With Me), a homebred owned by Bill Coburn, he marked a 220.5 to split 15th place with Robin Schoeller riding Polly Hilliard’s Spitfire Spook (Smart Spook x Miss Satin Whiz x Topsail Whiz) and Franco Bertolani on Inferno Sixty Six (Gunnatrashya x Snip O Gun x One Gun), who is owned by Slide Or Die LLC.

Along with winning $75,000 for the title, Fappani took home one year’s use of a deluxe four-horse trailer from Twin Cities Trailer Sales, a custom championship saddle sponsored by Bob’s Custom Saddles, a Gist Silversmiths championship buckle sponsored by the NRBC, a crystal trophy from the NRBC, Anderson Bean boots, a Whisper Bit from M3 Products, Ultra Cruz Equine Wellness and Joint Care plus other NRBC-sponsored products like a custom embroidered cooler, a commemorative champion medal and champion ribbon collar and roses.