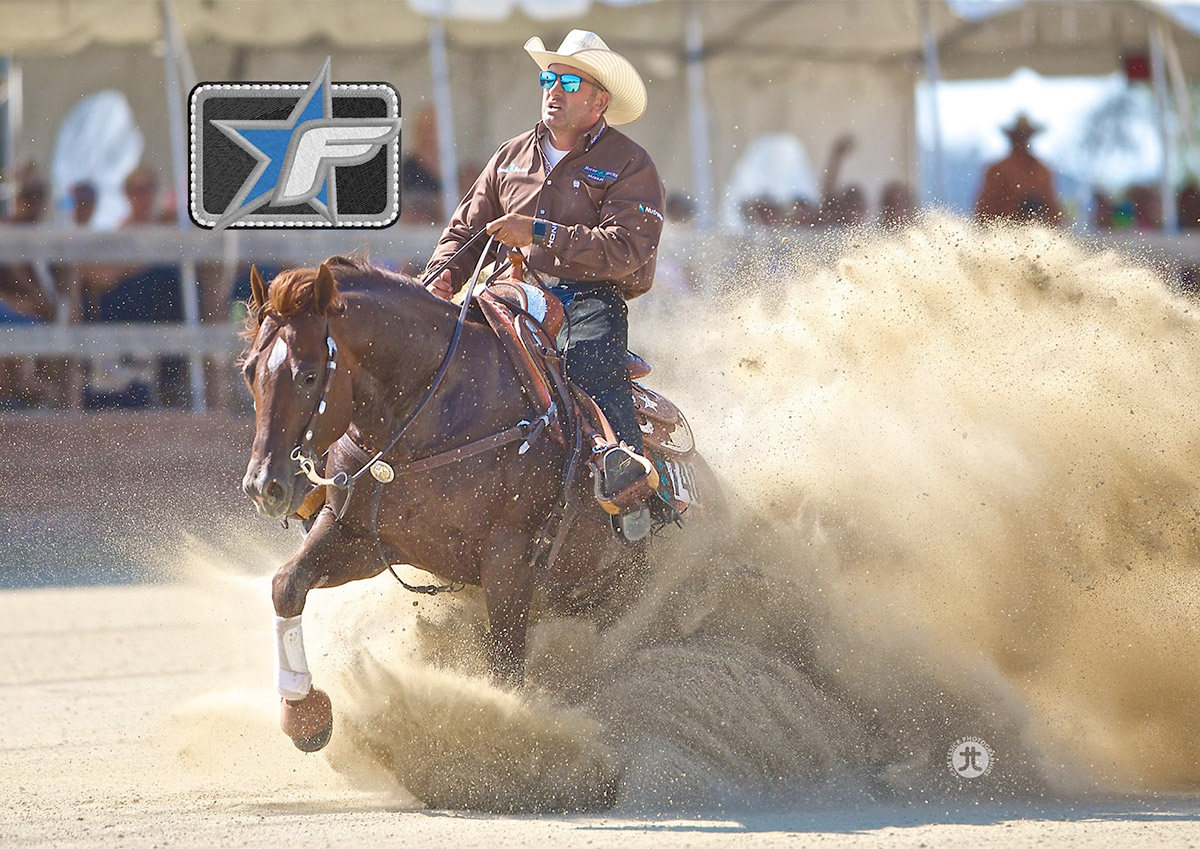 Fappani & Chic Dreamin Have Their Eyes on the Prize

When the Reining By The Bay Derby Open began, the first horse out marked a 224.5. The next was a 226. Two draws later, the judges gave a 230 and the spectactors crowded beneath long white tents went wild! If the size of the arena wasn’t intimidating enough, the competition drawing huge scores as they disappeared into a cloud of sand and dust should have done the trick. However, not one of those impressive scores earned the title this year. It wasn’t until Andrea Fappani swung a leg over his third mount of the afternoon, Chic Dreamin, that the show had a Derby Level 4 Open Champion! The duo marked a staggering 232 amidst the best of the best in a field of 25 Level 4 horse-and-rider teams.

Chic Dreamin, who is the leading performer by Equi-Stat Elite $5 Million Sire Magnum Chic Dream, is the “complete horse,” according to Fappani. The Scottsdale, Arizona-based trainer had his eye on the stallion for quite some time before he was able to get the horse in his barn.

“I really liked the horse. I thought he would fit my style, and it took me a little bit to get with him because he was trained all his life very different from the way I train, so it took me a few months,” Fappani said of the Silver Spurs Equine-owned stallion (out of Skeets Red Dunit x Skeets Peppy), who was bred by Kathy and Casey Hinton.

Fappani didn’t bring the then-4-year-old back into the show ring until the following year, when he won the National Reining Breeders Classic (NRBC) Level 4 Open right out of the gate.

“Last year was a great show year for us, and because we won the NRBC last year, we wanted to really concentrate on the [National Reining Horse Association] Derby this year. We didn’t get to win that, but I told owners – Michael and Michelle [Miola], of Silver Spurs Equine – that I think I could win the Reining By The Bay on him, and win another big title. And, that was the point here!”

They certainly made their point when they brought home a total of $32,491 for the Championship.

Even Fappani, an Equi-Stat Elite $5 Million Rider, admitted he was feeling the pressure this year.

“It’s always hard here, but with the added money, a few extra guys brought their best horses, and everyone was at the top of their game,” Fappani explained. “What sets this show apart, however, is the big arena, which encourages the competition to run a lot harder than they would in a smaller arena, increasing the chance of making a mistake.”

While the size may have intimidated some, the arena was just right for Chic Dreamin, who has more than $183,000 in lifetime earnings.

“This arena fit him. He had never shown here, and this is an outdoor arena, so he didn’t really know he was being shown. And he’s 6; he’s been shown a lot, so I think that was a good help for me,” Fappani said. “He was really honest in there and didn’t try to anticipate any maneuvers here. It worked out well!”