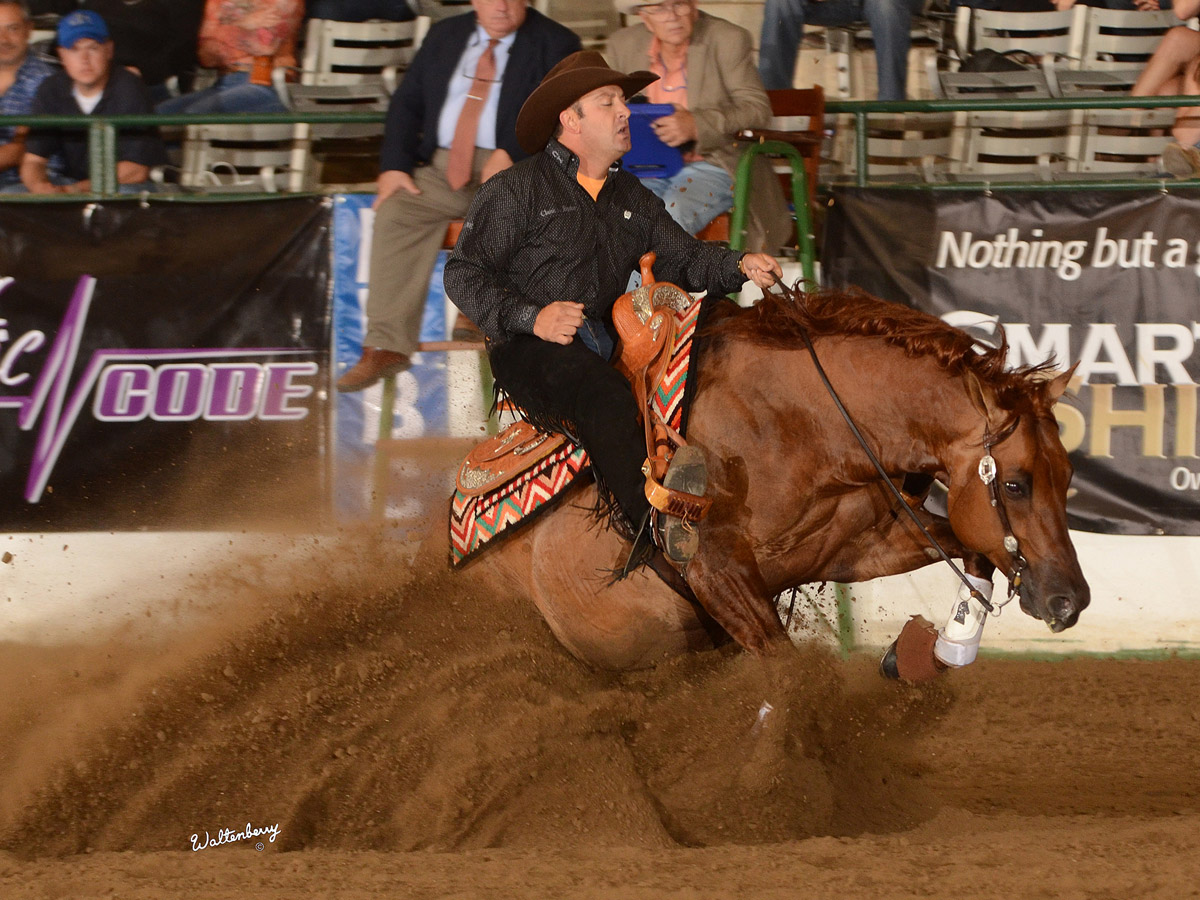 A dramatic run-ff, with Andrea Fappani and SG Frozen Enterprize prevailing over Casey Deary and ARC Gunna Sparkya by a mere half-point for the coveted championship, concluded Saturday’s exciting Open Classic Finals at the 18th National Reining Breeders Classic (NRBC), held April 13–19, 2015 at the Great Southwest Exposition Center in Katy, Texas. But the excitement over the finals didn’t stop there as spectators at the event and online were also buzzing about the new faces who captured the Levels (L) 1–3 Open Classic championships. Joao Felipe Lacerda and Gunner Dun It Again traveled all the way from Brazil to win Levels 2 and 3 and Marie Kleiner competed in her first-ever aged event competition aboard Wimpys Wrangler AC to claim the L1 Open title.

Outside the arena there was just as much to see and do. There were vendors galore to indulge every reiner’s shopping urge, the annual NRBC golf and poker tournaments kept the competition going outside the show arena and welcome and exhibitor parties had the social scene hopping. The NRBC also brought back Rein In Cancer’s Silent Auction and the Ride With A Ribbon campaign that had a successful debut at the show last year. Reiners could sign up to ride with a ribbon in honor of someone in their life who has battled cancer and even pledge a portion of their winnings to Rein In Cancer. which provides direct assistance to cancer patients who are a part of the horse industry. Among the many youth at the show, the NRBC is known for the fun kid’s activities and games they offer each year and this year they expanded on that idea with the new Reiner Kids Academy. It was received as an overwhelming success as 15 to 20 kids ages 10 and under attended the daily crafts and activities and made new reining friends.

The Open preliminary go-round was filled with 190 of the top 4-, 5- and 6- year olds in the reining horse industry. Casey Deary showed Magnum Starlights, owned by Antler Ridge Ranch LLC, of Clyde, Texas, late in the go-round on the second day to mark a 224.5 and win the go-round. “This horse was actually a colt that was born on our place. He is by Magnum Chic Dream and out of Starlights Sugarwhiz who I had shown. I rode her mother and father also, so Magnum Starlights is the third generation of that family that I have ridden. The grandsire, Little Bay Starlight, was a son of Grays Starlight that was the first horse that I showed that would always show better than it would ride at home,” Deary said.

In the finals, Deary and Magnum Starlights upped their game and marked a 225 to tie for fifth place prize money. “He has just been so much fun to ride. He is so great-minded and he’s got tons of rate, tons of stop and turn and he’s a pretty mover. He’s just a happy horse and I love him,” he said. Todd Bergen and Platinum Vintage also came close to the top, marking a 226.5 for fourth place. But it was Sam Schaffhauser and Gunners Tinseltown that were the pair everyone was trying to beat for most of the finals. Schaffhauser and Gunners Tinseltown had taken an early lead on finals night as they had competed as draw 7 to set the bar high with a score of 227. That score held on to the top spot through 20 finalists. But with only six horses left to run, Deary ran through the gate as draw 28 on ARC Gunna Sparkya, owned by Rabboni Reining Horses, of Italy, and bested Schaffhauser’s score by a half point marking a 227.5 to take the lead. Their time holding the spotlight alone, however, was short lived as Andrea Fappani and SG Frozen Enterprize ran through the gate just two horses later to match Deary’s high score. “We actually didn’t start the week as good as I was hoping. Once we got to the show I could just feel that SG Frozen Enterprize wasn’t at the top of his game, so I had to change my plan a little bit to get him to where I felt he needed to be to make the finals. He is usually real strong in his turnaround, but I had trouble with it all week. So in the first go I stayed on the safe side in his turn around and tried to mark everything else. I think his circles are his strongest maneuver, so I really tried to mark there,” Fappani said. “Then with only one day to prepare for the finals I knew I didn’t have time to change much, but this is a horse that I love and that I know really well. He knows when I am asking him to give me everything and that’s what he did in the finals. I pushed him really hard in his circles again and he was right between my reins. I never felt him hooked up like that mind wise. He was really focused on me and was a lot of fun to show.”

There were three more strong horse and rider teams left to run in the finals, but each one came up a little short and before long you heard the announcer inform the crowd to sit tight because there was going to be a run-off! Fappani has never been one to settle for a tie and tonight was no different. “One thing that I tell people is that I don’t know of any other sport where you can be co-champions. There is always a champion and a bunch of guys that tried hard to win, but just didn’t that day. So for me, unless I have a horse that is injured or think it wouldn’t be good for the health of the horse I always run it off. It’s just me and to be honest with you, it has almost always paid off for me. I won my first NRHA Futurity with a run-off and I won my first NRBC championship with a high score in the run-off. So, as soon as I heard we were tied I took the horse back and sponged him down to help him cool off before I had to run him again,” Fappani said.

Deary and ARC Gunna Sparkya were first to go in the runoff and laid down another strong run, marking a 225. Fappani and SG Frozen Enterprize, aka Iceman, were up for the challenge as they came running in and started their pattern with a huge stop. “I had heard Casey’s score and I knew I had a horse that could beat it as far as what he could do. I was feeling really confident going in and he was really good for me again, but we had a little bobble on our last stop so I knew the scores would be close,” As Fappani waited inside the arena for the scores to come in, the crowd was on the edge of their seats awaiting the results. When the announcer called out the score of 225.5, the crowd erupted with cheers as Fappani jumped up and stood on his saddle atop his horse and waved for the crowd. “I actually wanted to do a back flip, but once I got up there it looked a lot higher than what it did a few years ago. With age, I guess a few things change,” Fappani laughed. The win came with a big check made out for $75,000 along with the NRBC’s signature blue crystal trophy. It also included a year’s use of a Twin Cities Featherlite trailer, a Bob’s custom saddle and a slew of other prizes.

Iceman is a 6-year-old stallion with a unique story as well. Sired by Frozen Sailor and out of RS Rose SJ, Iceman was bred, born and raised in Italy by Marco Franchini. In 2012, the red dun stallion won the Italian Reining Futurity with Mirko Midili in the saddle. “I had a call from a friend during the go-round of the Italian futurity and he said that I needed to watch this horse in the finals because he would really fit my style if I could ever get a hold of him,” Fappani recalled. “I was drawn to him right away. Everyone was drawn to him. He was a horse that I could tell had the qualities to be something pretty special here in the states. But what really got me was his breeding because he still had all the big names in his pedigree but they were far enough back to where you could breed him to anything. I thought if I could bring him over here and win something big on him it would be pretty cool for the future to bring in some new blood here in the states.” But it took some convincing for Franchini to send his stallion overseas. “It was actually the first reining horse that he had bred over in Italy and he was a little scared of sending him to the states because he was never here before and didn’t really know how the business works,” Fappani said. “But then he trusted me enough to send him over and then got a real good offer to buy him from Silver Spurs Equine. I am really grateful to Marco for trusting me. He didn’t know a whole lot about me and never saw my facility or anything. He trusted me and what I said and sent me the horse. It changed both the horse’s and my life a little bit, which I’m thankful for.”

Now with an NRBC Championship as well as an AQHA World Championship in Junior Reining, Iceman’s lifetime earnings exceed $229,624. The win at the NRBC also helped Fappani to reach a new milestone as he surpassed $4 million in lifetime earnings. And now that Iceman has more than proven his talents in the U.S., Fappani is hoping to show everyone that he is just as stellar as a breeding prospect. “We already have six or eight babies on the ground, but we didn’t open his breeding up to the public until this year. Next year the plan is for him to just stand at stud and not show. So I’m going to take him to the Derby this year and then we will see after that,” he said.

The Reiner
by Laura Mae Schoeller