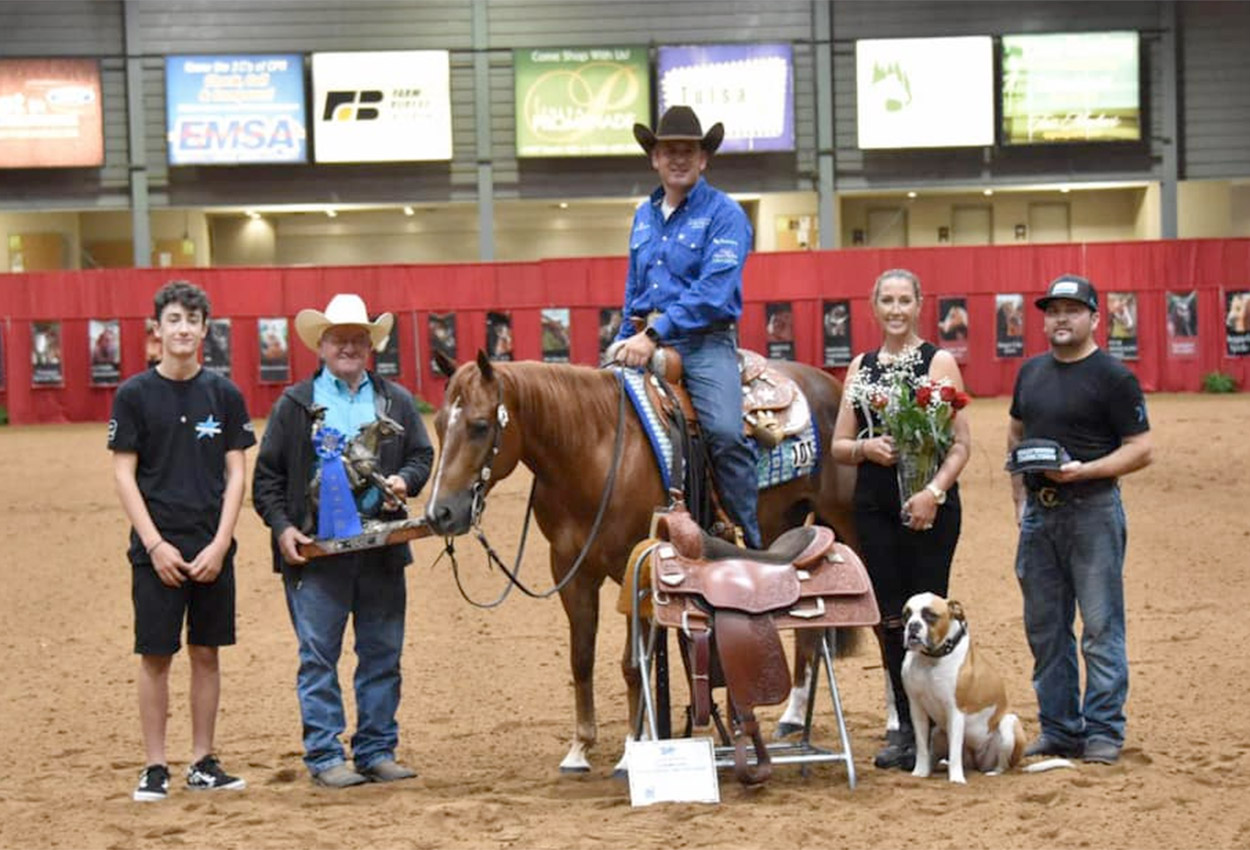 With more than $60,000 in added money, the Hollywoodstinseltown Futurity Open is a lucrative training ground, and on Saturday night, NRHA $5 Million Dollar Rider Andrea Fappani won the Level 4 Open on Itsallinthegenes, a horse he owns with his wife Tish. The pair marked a 224, besting the field of 89 by two points. The win came with a check for $14,593, as well as Bob’s Custom Saddle and awards from Oklahoma Equine Hospital and the Tulsa Reining Classic.

“This is a gelding we bred and raised. He’s by Smart Spook and out of Electric Genes (by Jacs Electric Spark), a mare I showed a few years back,” Fappani said. “Pat Warren owned the mare and let us do some extra embryos when she was done getting hers, and we thought it would be a great cross with Smart Spook.”

Although Itsallinthegenes was bred to be a non-pro horse for the Fappani family, the gelding showed a lot of talent.

“This is his first outing. We think a lot of him, and he didn’t disappoint us today. We’re still trying to figure out what the plan is. My son Luca will show him at the High Roller in the non-Pro, and after that we’ll make up our mind if he is going to go to the futurity in the open or the non-pro. He could go in both if he’s that good,” Fappani said.

For Fappani, the Tulsa Reining Classic presents an opportunity to put some pressure on the three-year-olds, while still keeping them comfortable.

“Today was just a consistent run. I don’t think we did anything amazing, but that’s my goal the first time out. He was spot on. Everything I asked he was there for me.” Fappani added, “As a three-year-old, I couldn’t ask for more.”

While there are some opportunities to show in futurities closer to home, Fappani prefers the Tulsa event.

“I have been coming for the last few years, and there is a reason for that. This is a great place. The Silvas have sponsored this futurity and it’s a great event,” Fappani said. “It’s an amazing arena. It’s big and nice, and there are plenty of places to get ready here. It’s one of my favorite, if not my favorite, for me to take my three-year-olds. It’s a great place for their first time out.”