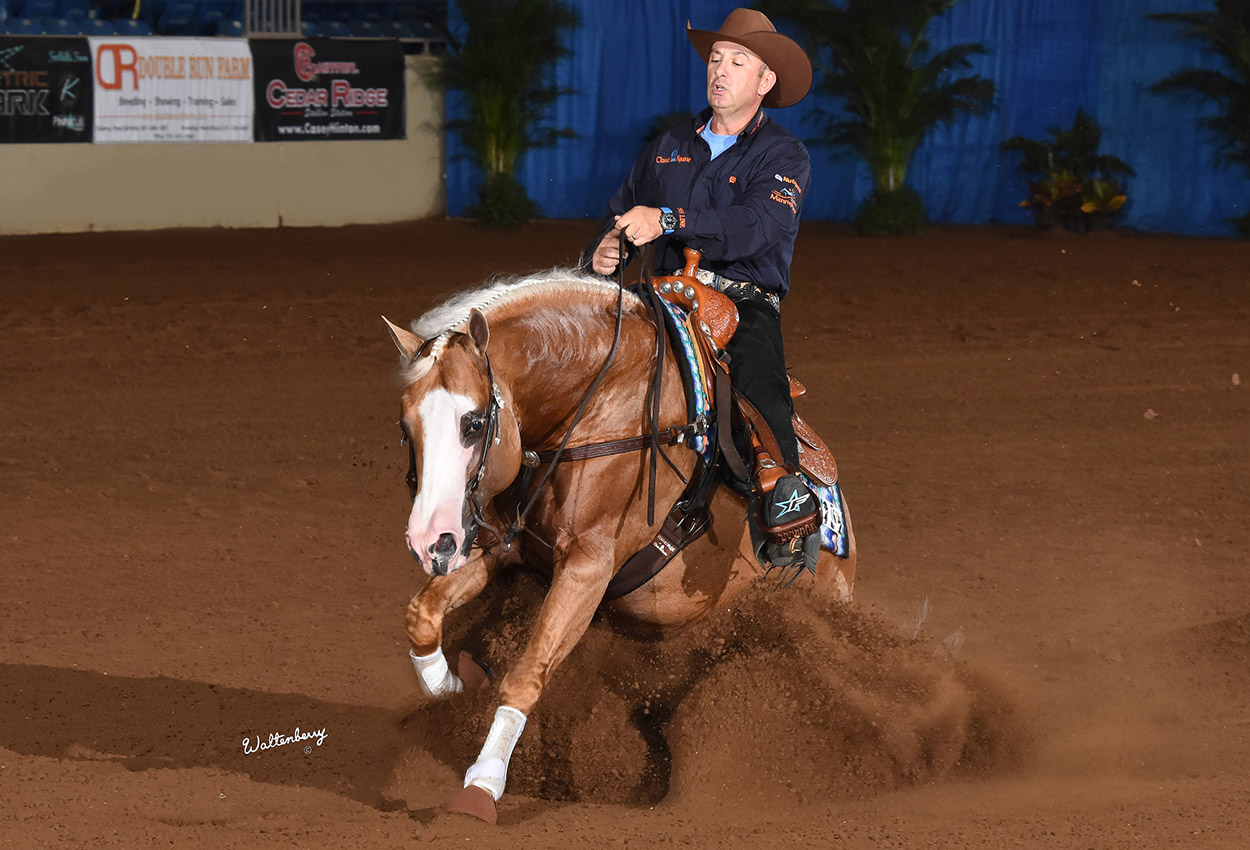 Modern Gun and Andrea Fappani didn’t waste any time linking up when they won the Reining By The Bay Derby Level 4 Open Championship on July 27. The pair, who had only been working together for three weeks, laid down a blistering 231.5 in the Woodside, California, sand. The win came with a $28,195 paycheck.

“I love the horse and I knew that I was getting together with him, but this was kind of a test run. I wasn’t sure what to expect. I trusted him 100% [in the pen] because that’s usually the way I go at it, and if they prove me wrong, then I’ll adjust my training,” Fappani said.

But the palomino stallion sired by Gunners Special Nite and out of the mare Taris Modern Design (by Mr Boomerjac) was with Fappani every step of the way as they ran National Reining Horse Association (NRHA) pattern No. 10.

Prior to the Reining By The Bay, Modern Gun, known as “Mickey,” had great success with Duane Latimer, winning the National Reining Breeders Classic (NRBC) Level 4 Open in 2018. When owner MS Stables decided to have Fappani train Mickey, the time constraint loomed as Fappani prepared Mickey for the Reining By The Bay.

“I had to adapt my way to him more than him to me because he’s a horse that’s been really successful. When something is working you don’t want to change it too much,” Fappani said. “I changed a few things on him but he adapted right away. Great horses are like that. You make tweak a few things here and there, but no matter how you ask them to do something, if they’re natural at it, they’re going to do it.”

Mickey’s demeanor in the barn is unusual for a horse of this caliber, according to Fappani.

“When I first got him, I doubted they sent me the right horse, because to be honest, horses that mark 230’s, they’re [higher strung],” Fappani said. “But no, he acts like a 6-year-old gelding, not like a breeding stud. He’s always chill and you’ve got to wake him up to go to work.

“This has been a great show for our team for a long time and we won it a few times, but it’s challenging because it’s a pen that brings a lot of high scores,” Fappani said, reflecting on his team’s success at Reining By The Bay. Fappani brought home multiple futurity titles on July 26 and his son, Luca, experienced great success in the Derby Non-Pro.

Fappani is currently preparing for The Run For A Million and has an impressive selection of horses to choose from. The Scottsdale, Arizona-based horseman earned the reserve championship on Epic Titan, a 2013 stallion bred by Clinton Anderson, of Stephenville, Texas, and owned by Silver Spurs Equine/Downunder Horsemanship. Epic Titan earned $20,840 with a score of 229.5.