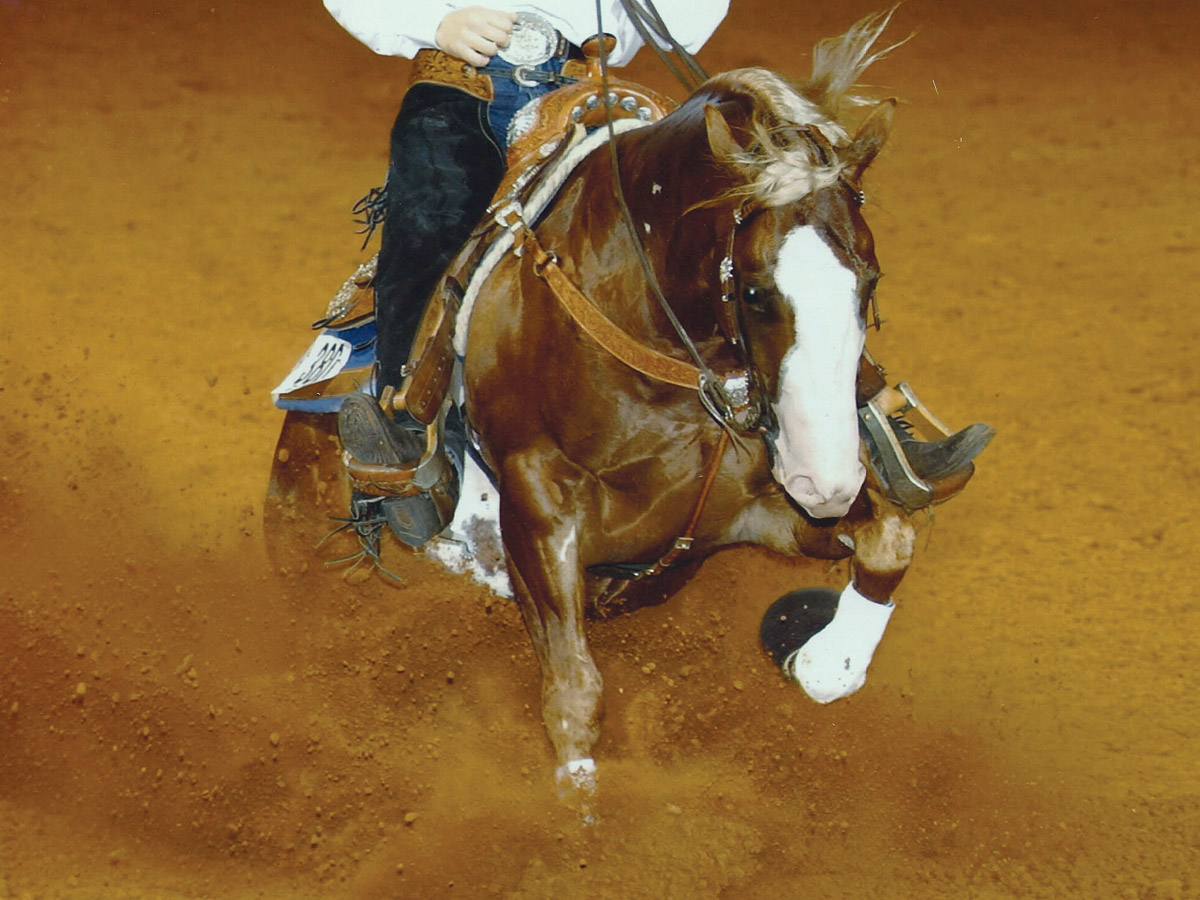 If a perfect ending had to be written about an American Paint Horse at the 2001 National Reining Horse Association (NRHA) Futurity, held Nov. 23-Dec. 1 in Oklahoma City, Okla., nothing could have topped what actually happened on the last day of the event.

The ultimate victor of the NRHA Open Futurity, RR Star, a 3-year-old sorrel overo stallion owned by Rose and Richard Lundin of Del Norte, Colo., proved beyond a doubt that he is more than just a great reining horse. With his victory, he became the first American Paint Horse to win the futurity and he won it in a nail-biting finish. Also, his rider, Andrea Fappani, is one of the youngest riders to win the NRHA Open Futurity and is the first international rider to do so.

The last day of the futurity saw 31 finalists reaching for the highest score. Finally, it came down to two. RR Star and Fappani had tied with another talented reiner and his horse with a score of 227.5. To determine a champion, the two riders and their horses competed against one another in an “overtime” work-off. Fappani and RR Star marked a 219.5 to win the event and capture $150,000 in earnings.

The NRHA judging system awards points based on technical and stylistic elements, along with consideration for the degree of difficulty. Reining is a judged event designed to show the athletic ability of a ranch-type horse inside a show arena. Contestants run patterns that include small, slow circles; large, fast circles; flying lead changes; roll backs over the hocks; 360-degree spins done in place and dramatic sliding stops.

“I probably didn’t ask as much of my horse in the work-off as I did during the finals,” said Fappani.

The 24-year-old from Antegnate, Italy, has been in the United States for four years working as an assistant trainer to Todd Bergen of Eagle Point, Ore. He came over as a non-pro and rode with Bergen for a year. He went back to Italy to complete a mandatory year with the Italian military, then came back and gave up his non-pro card to fulfill his dream of being a trainer.

“Italy will always be home,” he said. “But the best horses and riders are over here, so this is where I’ve always wanted to be.

“When I won the limited non-pro in 1997, I told everyone that my goal was to become the first Italian to win the futurity. Winning the intermediate open last year, I thought I was one step closer. I never thought it would happen this fast, though.”

According to Bergen, RR Star came to the futurity ready to win it.

“From the moment he stepped off the trailer, he just started riding good and every day he was like that,” Bergen said. “He was probably our easiest one at the futurity to ride.”

If RR Star ever tires of being one of the best reining horses in the world, his owners could probably help him with a career in Hollywood. The Lundins have supplied horses for some of the most popular movies and television shows, including Gunsmoke, Young Riders and City Slickers II.

Rose began riding reiners when she was 9, but had to give up show horses while she and her husband were developing their business. After 25 years away from showing, Rose purchased a few horses and sent them to trainers, and she began breeding her own show horses at home.

Her goal was to raise a Paint Horse that could win a major futurity.

“Anybody can go out and buy a horse,” Rose said. “We wanted to raise it, and we wanted it to be a Paint with the ability to get it done.”

RR Star was the realization of those dreams. The son of Like A Diamond (registered with the American Paint Horse Association) and out of the Lundin’s mare RL Miss Kitty (registered with the American Quarter Horse Association), RR Star inherited his sire’s dark coat, flaxen mane and two large white spots on his belly, as well as his athletic ability.

“Every major trainer at the futurity that I knew came by and said he’s one of a kind; you’ll never get another one that’s that consistent and gorgeous,” Rose said. “He was so pretty with that white mane flaring through the air.”

“There were 445 horses in the Open Futurity and these horses come from all over the world,” said APHA Assistant Executive Secretary Jim Kelley. “RR Star is truly the very best of the best, because everybody would consider this to be the premier reining event of the year.

“For any horse to win this competition, considering the competitive field, is truly remarkable. RR Star has proven once again that Paint Horses have the talent, athleticism and intelligence to win at the highest levels of competition.”

The NRHA Futurity has been held annually since 1966 and is open to 3-year-old horses of any breed. For more information on the NRHA Futurity or the NRHA, visit their Web site http://www.nrha.com/ or call (405) 946-7400.