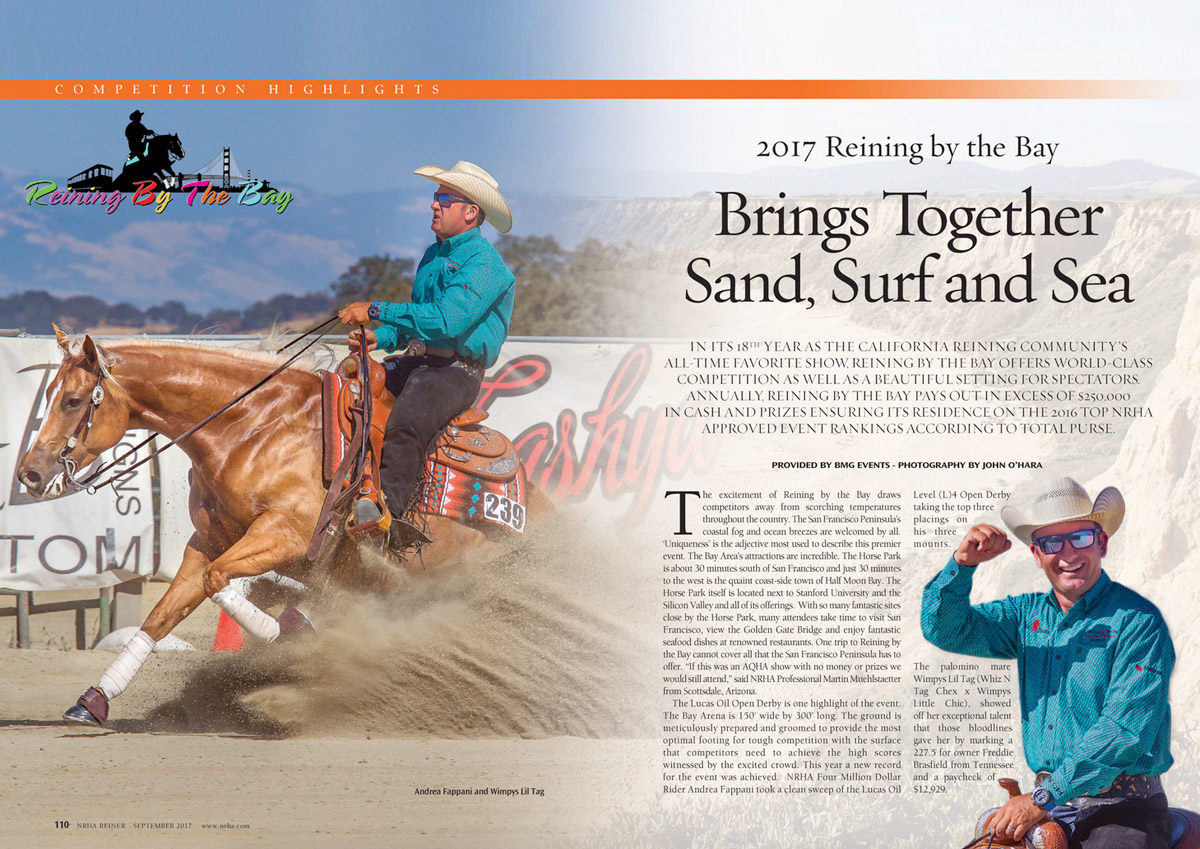 The excitement of Reining by the Bay draws competitors away from scorching temperatures throughout the country. The San Francisco Peninsula’s coastal fog and ocean breezes are welcomed by all. ‘Uniqueness’ is the adjective most used to describe this premier event. The Bay Area’s attractions are incredible. The Horse Park is about 30 minutes south of San Francisco and just 30 minutes to the west is the quaint coast-side town of Half Moon Bay. The Horse Park itself is located next to Stanford University and the Silicon Valley and all of its offerings. With so many fantastic sites close by the Horse Park, many attendees take time to visit San Francisco, view the Golden Gate Bridge and enjoy fantastic seafood dishes at renowned restaurants. One trip to Reining by the Bay cannot cover all that the San Francisco Peninsula has to offer.“If this was an AQHA show with no money or prizes we would still attend,” said NRHA Professional Martin Muehlstaetter from Scottsdale, Arizona.

The Lucas Oil Open Derby is one highlight of the event. The Bay Arena is 150’ wide by 300’ long. The ground is meticulously prepared and groomed to provide the most optimal footing for tough competition with the surface that competitors need to achieve the high scores witnessed by the excited crowd. This year a new record for the event was achieved. NRHA Four Million Dollar Rider Andrea Fappani took a clean sweep of the Lucas Oil Level (L)4 Open Derby taking the top three placings on his three mounts.

The palomino mare Wimpys Lil Tag (Whiz N Tag Chex x Wimpys Little Chic), showed off her exceptional talent that those bloodlines gave her by marking a 227.5 for owner Freddie Brasfield from Tennessee and a paycheck of $12,929.

Thebettertohearuwith, (Spooks Gotta Whiz x Chex Out The Cowgirl), owned and raised by Bill Coburn, took the reserve championship with a score of 226.5 and a paycheck of $8,888.69, and third place went to Rancho Oso Rio’s entry, Spooks Show Time, marking 223.5 and receiving a paycheck of $7,676.59. The total winnings for Fappani’s trifecta sweep were $29,494.28!

“Reining by the Bay is always a great show for our team, but this year was even better,” states Fappani. “All three of my Derby horses showed great and gave me everything I asked them to.” NRHA Professional Ricky Nicolazzi, another rider from the Fappani team, aboard Dunnits Special Nite (Gunners Special Nite x Dun It For Chex), tied for reserve in the L3 Open Derby and tied for the win in the Derby’s L2 Open division earning $5,683.60 for owners Rancho Oso Rio LLC.