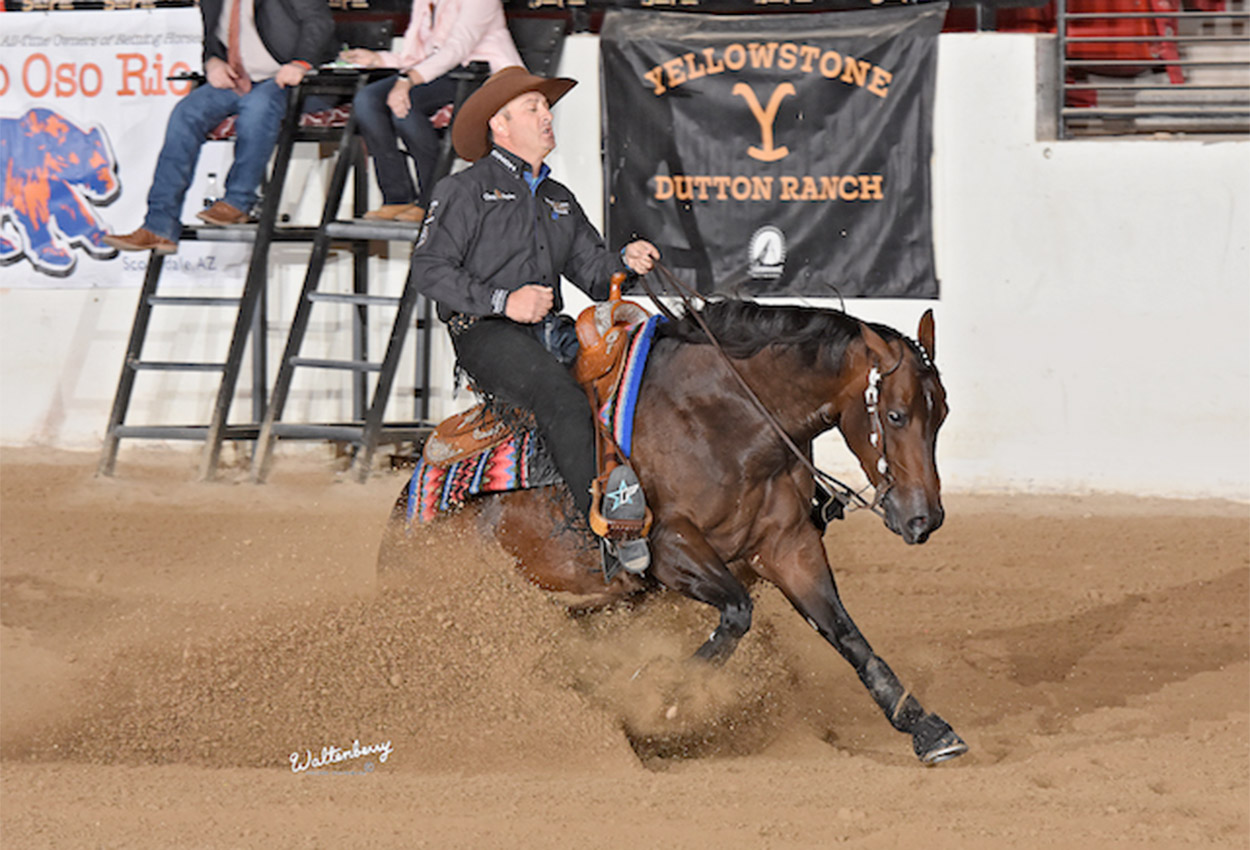 Electric Enterprize lived up to her name at the High Roller Reining Classic, winning the Futurity Open with style in her show pen debut.

The mare turned in an electrifying performance with Andrea Fappani in the saddle. The judges scored the pair 222, a full 2-point lead for the championship, cashing in for $13,422.

“This mare is really special to me because I rode both her mom and dad,” Fappani said. “She was born at Rancho Oso Rio LLC, so I’ve been around her since she was born.”

Tamarack Ranch bought the bay mare in 2018 as part of a package deal from her breeder, Rancho Oso Rio LLC, when they bought her dam Electric Genes. The broodmare by Jacs Electric Spark and out of Taris Designer Genes (by Mr Boomerjac) had compiled an Equi-Stat record of $89,914 with wins such as the 2016 Reining By The Bay Derby Level 4 Open.

“The owners of Tamarack Ranch knew she was special to me and have kept her with me,” Fappani said. “She rides a lot like her mom. I smile when she does the things she does because it is just like her mom. I made all my mistakes and figured out how everything worked on her mom so I know just what works with her.”

Fappani bought Electric Enterprize’s sire, SG Frozen Enterpize straight from Italy based on a video alone. Despite never having ridden the stallion prior to the purchase, he turned out to be a good choice have produced get with about $140,000. And, earlier in the High Roller show, Luca Fappani added to that total by riding the stallion’s son, Icecube, to the Derby Level 4 Non-Pro Co-Championship.

Fappani plans to take Electric Enterprize to the Best of the West event in Arizona and will likely limit her show experiences to smaller shows before the National Reining Horse Association Futurity in November.

“I made the mistake with her mom to show her three times before Oklahoma City and felt she had her peak before then,” he said. “She is strong mentally, but a little smaller so I want to be careful and make sure she peaks at just the right time.”